Fred Wilson, one of the world’s most prominent venture capitalists, shares the three big coming trends in tech. He has invested in the early stages of companies like Twitter, Tumblr, Foursquare, Zynga, Kickstarter and Bitcoin. His ideas about business trends are really interesting, both for investors and for startup entrepreneurs. Wilson talked at LeWeb conference in Paris (December, 10, 2013) and he used as an example for each megatrend, some startup companies from his own portfolio (USV).

Bureaucratic hierarchies are the way that the world has been organized for the past couple hundred years. Markets, governments and businesses have one person on the top of the pyramid organizational structure controlling everything. Transaction and communication costs were so high in the industrial era that that was the most efficient way to organize work. But we are now in the information age, where technology-driven networks are replacing  bureaucratic hierarchies. Some examples are:

A newspaper has an army of reporters, who report to a team of editors, who then report to a publisher. And they collect stories, the editors direct what stories are going to get reported on, they get edited and they eventually get published. Finally the paper is printed and delivered. Now with Twitter, all of us are the reporters, the crowd is determining what news is most important and we get our news instantly, on our phone. This is the demonstration of a technology-driven network.

YouTube have changed the way to produce and watch videos

Video used to get produced for TV in a very hierarchical structure, making very hard to produce video outside of that system. With YouTube, all of us are video creators, we publish the video and the crowd determines what’s important and we can look at the most important videos to us on our phones.

SoundCloud allow us to create music outside the music industry

In the SoundCloud model, everybody can create audio and music only by posting it to SoundCloud. It is not neccesary to go to a record label. You just put your content up, you get found by the crowd, and you become the most popular artist in the world outside the traditional hierarchical system of radio and the music industry.

Codeacademy and Duolingo: learning code or languages using a network instead of the traditional schools.

Codecademy, for learning to code, and Duolingo, for learning languages, both use a similar network model, where everybody teaches everybody, delivered on a phone/browser.

Megatrend 2: Everything is Gonna Get Unbundled

This trend has to do with how services are packaged and taken to market. In the traditional world it was very expensive to package and deliver things to market, so products were bundled together and consumer had to buy the thing as a whole. Technology is changing that and now it is very efficient to package up and deliver things. Everything is getting unbundled, and people are starting to deliver more focused services, best of breed, delivered a la carte. Some examples:

The old newspaper, all in one package, is getting unbundled

We used to buy one newspaper and get: world news, local news, sports, business, fine arts, classified ads – all come in one package and we pay one price for it. Now on mobile and the internet, we get all of those services from different people, and they are better, because the people who produce them are focused on their area of expertise.

In the past, it was very expensive for a bank to open a new branch. This is why everything is offered in one place from the same bank: consumer loan, mortgage loan, credit card, small business loan, big business loan, working capital finance, etc. Now technology-driven entrepreneurs are starting to pick off each of these lines of businesses from the bank and delivering them in a network based business model. This is happening very rapidly through the power of networks.

He thinks the banking industry is rapidly getting unbundled and using the power of our networks to do that.

The classic university model is very expensive because it requires a professor in front of a group of students, a building, a library filled with books, etc. But now we have technology to record and stream classes, we have tablets with e-readers to read books and they are much cheaper than libraries. The prices are coming down rapidly for educational content. Even a course of research could be cheap and it is getting unbundled quickly. USV has an investment in a company called Science Exchange, which uses a marketplace model and a network based model to allow researchers all over the world to collaborate together. He thinks education is very much getting unbundled and we are very early in that process.

It used to be that you pay a TV cable suscription to have all of your entertainment content on that.Today we get Netflix, YouTube, Hulu, VHX on our phones and we can combine the entertainment products we want a la carte, on our phones and access it when we want and anywhere. And with services like AirPlay and Chromecast we can connect our phone to the big screen and control the way we want to receive it.

Megatrend 3: We are All Personally a Node on the Network, Connected All the Time.

Fred says that when somebody is driving a car is also a node on the network, we can instantly connect and be taken where we want to go. For instance the startups Uber (it connects riders to drivers through its apps) and Hailo (smartphone apps which use GPS to find your nearest taxi). This is profoundly impacting the world the transportation: the limousine business, the taxi business, but it’s also impacting the rental car business and the delivery business.

Venmo, Dwolla and Square, for instance, are services that allow you to effectively have a wallet on your phone. Some of them allow you to send money to anyone who has the app on their phone. “It’s peer-to-peer, it’s a network it’s changing the world of payments dramatically.”

Tinder is a app that facilitates communication between nearby users. It leverages location and photos of the users and it is used for dating.

This article is a summary of the first part of Fred’s speech. The second part of the speech will be in a following post. 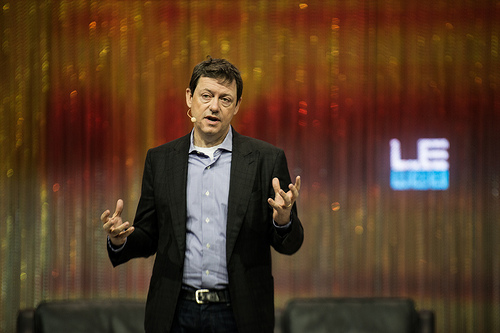 I hope you find the three Fred Wilson’ megatrends as fascinating as I have found. If you liked this article or you think it can be useful for your contacts, I will appreciate if you share it on your social networks. Thanks!